To understand CBD isolate, one must first understand what CBD itself is. Cannabidiol abbreviated as CBD is a cannabinoid obtained from cannabis. Although present in marijuana and hemp, both variances of the cannabis plant, cannabidiol is majorly extracted from hemp.

Both hemp and marijuana contain cannabidiol and tetrahydrocannabinol (THC), howbeit, they do so in distinctly varying proportions. Hemp is mostly composed of CBD and has a very low amount of THC; hence, CBD is largely derived from it. In the marijuana plant THC is most prevalent, with CBD accounting for a very small percentage of its chemical makeup.

Cannabidiol is a non-psychoactive chemical as opposed to tetrahydrocannabinol which is the major cause of the “high” people feel when they take marijuana. There are a lot of controversies surrounding the use and safety of cannabidiol, however, they are beginning to clear up as more evidence, research, and study are proving that CBD consumption in the right quantity is safe.

CBD Isolate: What is it?

This pure form of cannabidiol is gotten by first removing the active compounds in cannabis through a conventional extraction process. Once that is done, THC and every other phytocannabinoid and plant matter is stripped away in the refining process; leaving only the purest form of the cannabinoid compound.

Depending on the extraction and refining process used, the isolate may emerge in the form of large crystals or as fine powder. Neither form of the isolate should have a distinct taste or odor; however, they may contain a slight cherry flavor.

The body produces its own cannabinoids and so external cannabinoids like tetrahydrocannabinol and cannabidiol affect the body as they can act on the body’s cannabinoid receptors. Naturally, cannabinoids produced by the body affect a number of bodily functions such as:

The following are effects that researches believe CBD has on the body:

Studies have also shown that cannabidiol also influences the serotonin 5-Hydroxytryptophan (5-HTP) receptor, which is a non-cannabinoid receptor. By influencing this receptor, cannabidiol works to relieve pain and anxiety in some people because the serotonin chemical affects depression, sleeplessness, and anxiety levels in the body, among others. Visit https://www.medicalnewstoday.com/articles/232248 to learn more about serotonin.

The following are some of the health conditions that can be treated with CBD isolate:

Although still in its early stages, research and study of the effect of this cannabinoid on cancer growth show that it might be effective in preventing the growth of cancer cells. Also, there are certain effects like vomiting and nausea that cancer treatment usually has on cancer patients.

Regarding this, the National Cancer Institute (NCI) have revealed that CBD may be able to alleviate some of these side effects. However, owing to insufficient research, the NCI is not in support of using cannabis in any form of treatment.

The treatment of anxiety is one of the major uses of cannabidiol today. Various studies have proven that the chemical is effective in tackling anxiety in most age brackets. One of these studies was carried out in 2019 to confirm whether cannabidiol worked to reduce anxiety levels, improve sleep, or both.

For the study, they worked with 72 adults from a psychiatric institution who had been medically proven to have sleeping issues or anxiety. After these adults underwent CBD treatment, about 79% of them reported a decrease in anxiety levels and 67% reported having better sleep. Also still in the same year, another study indicates that the chemical worked effectively in decreasing anxiety in teenagers suffering from social anxiety. 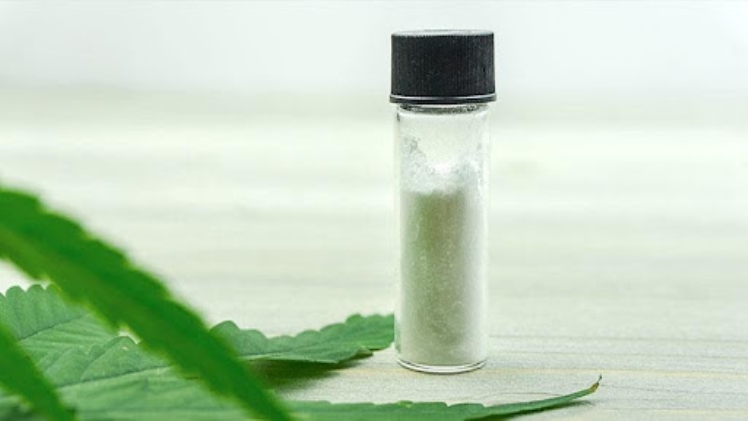 Researchers see cannabidiol as a promising treatment for epilepsy as it has had antiseizure effects on certain patients. Both the Food and Drug Administration (FDA) and the American Epilepsy Society seem to share the same view, seeing as the FDA has approved the CBD product- Epidiolex for the treatment of epilepsy. Also, the American Epilepsy Society says that research into the effectiveness of the chemical in the treatment of epilepsy is promising.

Isolate also work well as a pain and inflammatory reliever. It’s been found to be effective in treating various pains from various health issues including cancer, fibromyalgia, arthritis, and neuropathic pain, among others. Click here to learn more about fibromyalgia.

Although CBD isolate is effective in relieving different kinds of pain, studies suggests that full spectrum products may be more effective because they contain THC.

Although generally considered a low-risk substance, cannabidiol isolate have been found to have a few side effects in some people, some of which include diarrhea, insomnia, decrease or increase in appetite, and fatigue.

It may also react with certain drugs and so should not be taken by people who are on prescription drugs without the consent of their doctor. For those who do not fall under this category, it is advised that consumption should be moderate and time be taken to gauge the body’s reaction to various dosages.